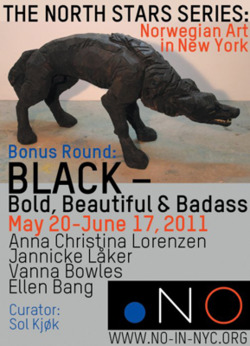 For more information go to www.no-in-nyc.org
NORTH STARS Series — a suite of exhibitions of works by contemporary Norwegian artists structured around the tricolor of their country’s flag. In response to popular demand, .NO is pleased to extend this series with a bonus round opening on May 19. Having now run the gamut of the official flag hues, this final installment is dedicated to the color that connotes the very foundation for contemporary Norwegian society: the rich, oily black of the North Sea petroleum industry.
On the surface level, the artists selected for this show have a shared preference for BLACK, as expressed in the minimal, achromatic palette of Ellen Bang’s sculptures and of the drawings by Vanna Bowles and Anna Christina Lorenzen, as well as in the dark, offbeat humor conveyed in Jannicke Låker’s videos.
Spanning decades in age, the exhibitors have received significant acclaim in both the Norwegian and the international art scene.
The second part of the show’s title is meant to convey the friction between seeming opposites: in traditional thinking, Bold is ascribed to the strong male principle, while Beautiful connotes the soft and feminine. For the accomplished artists featured in BLACK, such conflicting sets of characteristics are not mutually exclusive. Mining the rich field of copresent opposites, their works have the vital tension thus described by Jung: “Only the paradox comes anywhere near to comprehending the fullness of life.”
The title also reflects these artists’ stance in the contemporary artworld. Lorenzen, Låker, Bang and Bowles do not shy away from qualities often scoffed at in certain dominant circles: visual pleasure and solid craft. These women have the audacity to be vulnerable and authentic — opting out on ironic distance, where the laugh is always at somebody else’s expense, they dare to lay themselves bare. The results are works that stand up for themselves and on their own two feet, not needing the crutch of an accompanying theoretical manual.
And that is where Badass comes in: according to the Urban Dictionary, “the badass carves his own path. He wears, drives, drinks, watches, and listens to what he chooses, when he chooses, where he chooses, uninfluenced by fads or advertising campaigns. He feels no obligation whatsoever to justify his beliefs, values, convictions, morals et cetera with anyone. He likes his music because it sounds cool to him. Badass style is understated, but instantly recognizable.” Silently appropriating an epithet unjustifiably associated with the male gender, Lorenzen, Låker, Bang and Bowles are true badasses, producing the kind of work that .NO wants to show: “awesome to an extreme level” (Urban Dictionary again) — art that kicks ass!